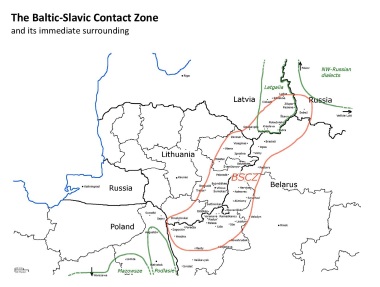 The TriMCo project aims to uncover the multi-factorial mechanisms leading to the rise of linguistic areas. The novel idea of TriMCo rests in the integration of several approaches to profile typologically significant areal clines by employing tools and achievements of typology, areal and contact linguistics, historical-comparative linguistics, dialect geography and computational methods mainly on the basis of coherent oral discourse. This integration requiresa sufficiently fine-grained level of linguistic analysis and a small enough area with well-attested phenomena of convergence. For this purpose we have chosen the Baltic-Slavic Contact Zone (BSCZ) and will attempt to establish a virtually exhaustive picture of the mechanisms and triggers involved in the rise of 12 representative features belonging to different structural levels. Previous research has demonstrated that at least the following three factors interact: (i) universal principles, (ii) areal neighborhood effects (thus, contact), (iii) genealogical closeness. We will triangulate these three factors, i.e. establish their interplay and relative weight in comparison to one another. Variation within Slavic and Baltic varieties of the BSCZ and of Slavic and Finnic varieties in its immediate neighborhood will be analyzed in detail. In order to recognize the inclusion of particular features into larger clines, we plan to highlight the purported peculiarities of the BSCZ against the background of larger, surrounding areas and of dialect continua.